Hopefully, you have enjoyed a nice, food-laden downtime surrounded by family and friends during the last Christmas season. At least that is the general idea around the globe. After a year of hard work, everyone deserves time off to release the steam and stress accumulated over the endless hours spent in office and lab. Odds are, that you have been working even during this time. Surprised? In academia, this is deepened depending on the seniority of your position.

We can discuss this topic endlessly. But we would end up with a bunch of opinions, ideas, personal experiences, and not much more. Every discussion benefits when actual data is involved. Leaning on historical data, we can elevate any discussion to a statistically more reliable level. Zooming at the electrical engineering disciplines, namely antenna engineers, we looked at the data of the IEEE Transactions on Antennas and Propagation. The number of papers published every month since 1963 can help answer some of the questions about the downtime scholars do or do not get. 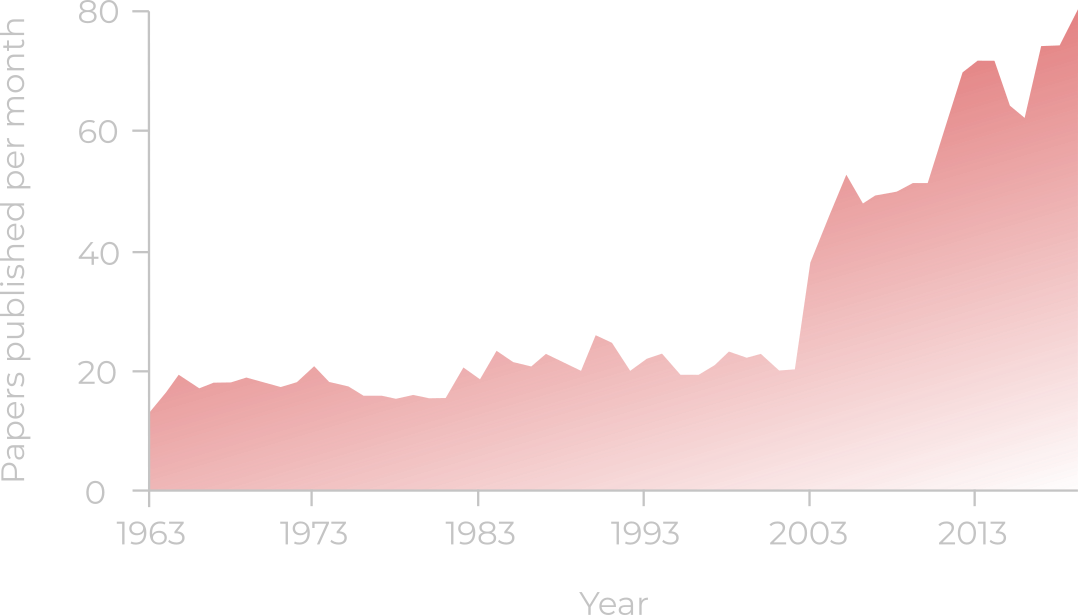 The average number of papers published per month in IEEE TAP between 1963 and 2019.

Despite this, the stability of the scientific output from 1963 to early 2000 suggests the scholars have been getting more downtime. The workload has been distributed among the growing number of people. This is arguably beneficial - humans en masse need the downtime to recuperate for an upcoming cycle. Not to mention that downtime is an indispensable part of the origin of novel science. Your brain is much less likely to come up with breakthrough ideas under continuous pressure.

After 2000, the average amount of papers published per month took an upward trend and kept growing ever since. The number of tenured positions in the Science and Engineering fields, on the other hand, has been mostly steady compared to the number of PhDs awarded annually. Shown on the graph below, the contrast between the growth of the number of graduated PhDs and available positions in academia is astonishing.

Number of PhDs’ awarded annually and the number of faculty positions in science and engineering fields over time. Data source: Nature.

Assuming this development continues to this day, it is no surprise that the number of papers published monthly boomed. It is more surprising it did not start growing earlier than around 2000. The yearly downtime researchers have been slowly declining. This is a natural result of excessive growth in the number of published papers and students to supervise.

At the same time, the increasing grip of social media craze has infiltrated all aspects of our lives, including academia. The popularity, slash attention contest did not miss the noble institutions dedicated to educating the world owing to the psychology of social proof. Keeping oneself informed on the progress in a research field became much easier with the rise of the internet. Liberalization of the access to information inevitably accelerated the research cycle, partially resulting in more papers published per capita.

The graph below has an additional blue line that indicates the number of papers published in December. The data before 1983 can be omitted from the analysis. Until then, besides the ‘glitch’ in 1964, the journal was published every other month. The rest of the curve indicates that many December issues of the journal were above average and especially the last few years, which were off the charts. 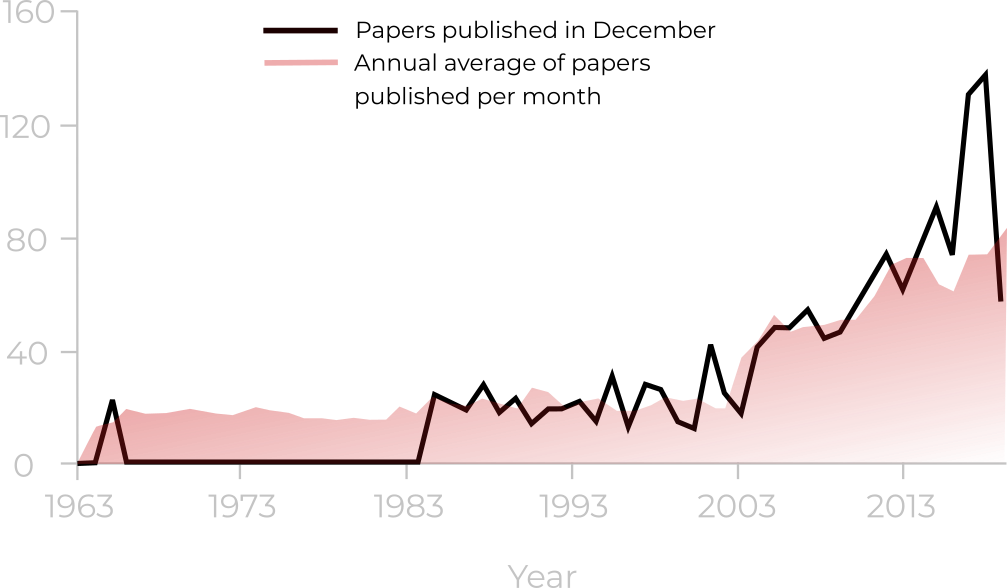 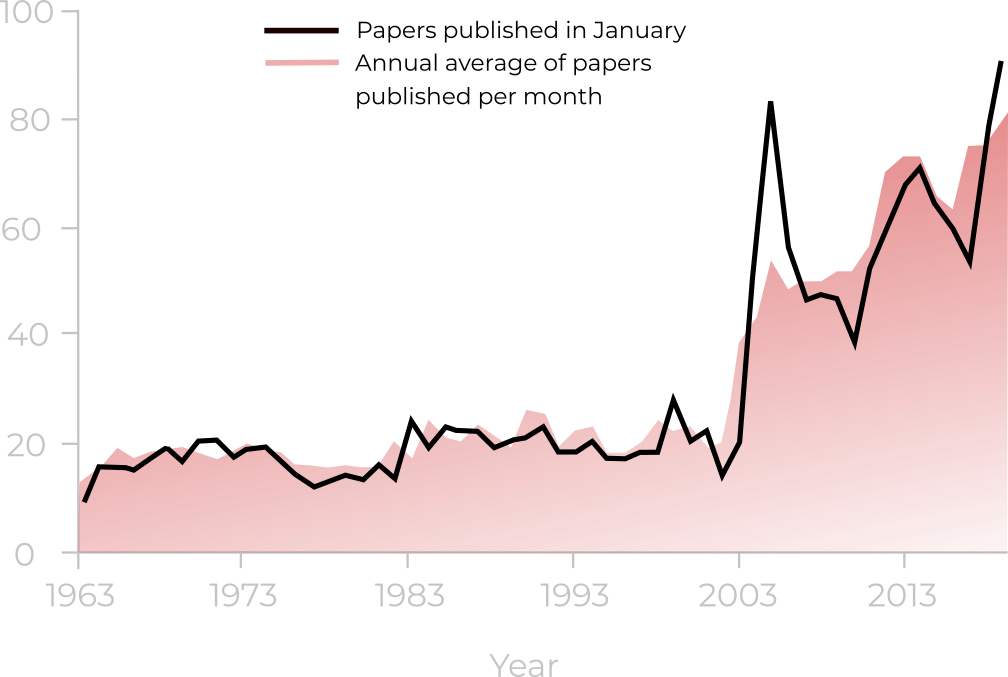 The answer to the question whether the scholars get the downtime during the biggest holiday is, not really. On the contrary, the time before Christmas tends to be on the busier side. At least compared to the rest of the year. The competition over the tenured positions and the tendency to take the academic performance as a zero-sum game only add weight on the shoulders of scholars.

If not Christmas, is there any other time of the year that is more chilled? Well, not really. Summer months have consistently seen a similar average number of papers published compared to an average month. Sum of the difference of the curves in the image below gives +10 published papers above the average. The summer months are therefore very close to any other month during the year - doesn’t sound like a real vacation to me. You might be nodding in agreement. Remember the sunny beach? The wind, the seagulls, your kids playing? All that, while writing and correcting a paper and wondering if the laptop overheats in this weather. 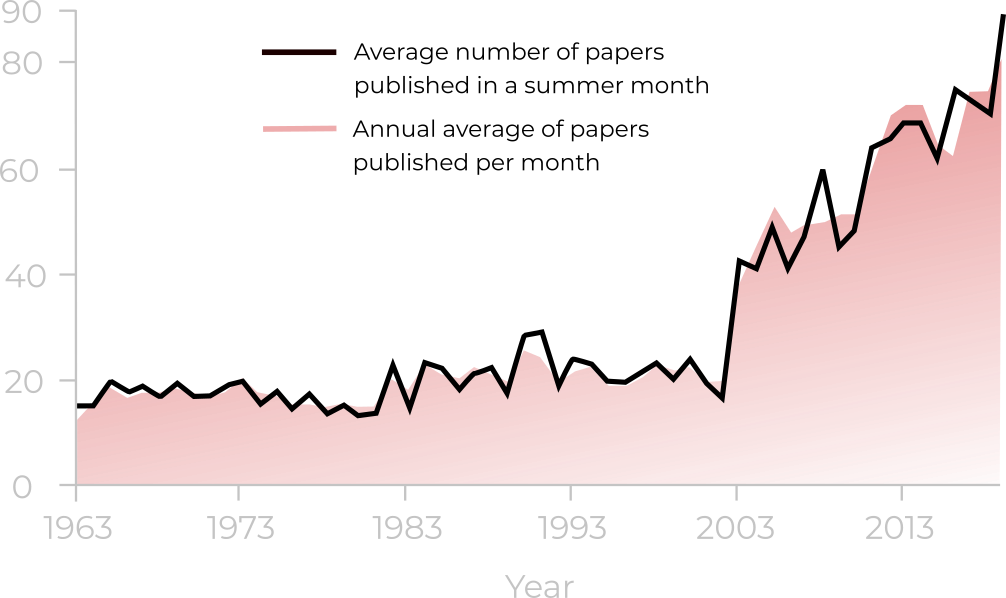 Summer time monthly (based on June, July, and August data) average versus annual average per month.

As humans we continually push ourselves - it is our nature. And the academic world is not an exception. To be on the top was never easy and it is getting tougher. Many professors are more interested in teaching or having a balance between career and personal life. Is there a limit to how hard we can work? Of course, but we didn’t reach it just yet. It will be those who can let go and relax that will be the winners. The break from constant effort is a must-have to enter the undiscovered dimensions of this world. At least many outstanding scientists think so. Paradoxically, more rest means better results at work. Or what do you think? Leave a comment now.