Where do Electrical Engineering scientists publish and why

Where do Electrical Engineering scientists publish and why

As electrical engineers, we have many avenues to choose from when deciding where to publish our work. Why and how do we select from the sea of options transpiring the endless waves of internet? A generic image of an engineer is that of a person who is honest and dedicated to the mastery of his or her craft. It is no coincidence there are many idealists among engineers, because the field itself is rooted in searching for the truth, in the fundamental principles of physics. And no one can mess with physics. The impersonal nature of physics related disciplines attracts people who live for purity, but many of us have fallen out of favor with academia when we hit a wall of human factors meddling with our noble quest for truth. Ambition to be the most famous researcher out there, whatever that means; competition for limited and/or prestigious funding; securing life-time tenured position on esteemed institutions, you name it. These are but a few influences contributing to the fading motivation of otherwise idealist researcher. The other end of the spectrum are those of us who pull out with disgust and resentment towards the system they found themselves amidst, like Ripley walking into a chamber with facehugger eggs. Instead of sprinkling the chamber with a flamethrower, they resort to survival mode satisfying minimum criteria to keep their position as a ransom for the freedom to do what they like best - developing their field of knowledge, teaching and supervising the next generations, or organizing conferences. Of course there is a large spectrum of grey's between the black and white extremes.

Publishing activities are an integral part of the academic ecosystem and you will not meet a researcher who has not heard the 1928 dated adage Publish or Perish, gaining momentum like a snowball rolling down the hill to this day. Even Nobel prize winner Peter Higgs partly responsible for Higgs Boson discovery concluded that today’s requirements on academics would have prevented him from making groundbreaking discoveries if he should carry out the same research nowadays. The number of published papers, or “productivity,” became the measure of researcher evaluation. Constant activity is glorified over giving academics the peace and quiet needed to stimulate radically innovative ideas.

While the frantic pace at which scientists are expected to generate results is partially an outcome of growing competition, it also owes much to the way the publication environment functions. In a survey aimed at electrical engineering (EE), we asked which journals scientists across all levels of seniority prefer to publish in and why. Turns out, the majority of EEs (Figure 1) trusts IEEE journals based on the rigor of the review process, reputation wielded by the organization, and stable content quality. 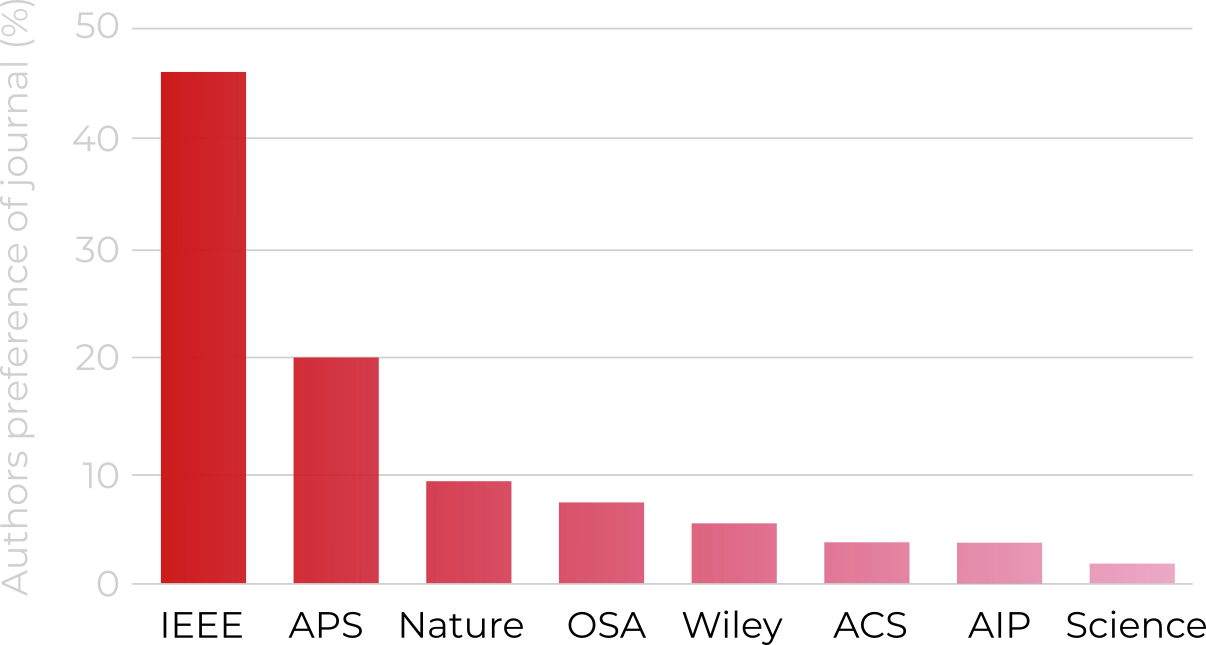 Figure 1 Most EE researchers choose to publish in IEEE journals. While APS is a moderately attractive option, Nature, OSA, Wiley, ACS, AIP, and Science are of marginal interest to the EE community.

A recent study done by Publishing research consortium found out, that the prevalent single-blind review process is considered effective by only 52% of respondents, while the double-blind by 71%. While quality of the review process is the main concern to EE community, staggering 74% believe there is a need for a total overhaul of the review system. Even though double-blind peer review is considered more effective, open peer review is gaining momentum and is supported by 50 to 70% of researchers.

The confidence that peer-review is the best way of selecting the manuscripts for journals has declined as well. This fact reflects the growing number of publications clogging the editorial boards. While technically sound, many of the papers present applied research, solution to technically challenging tasks, or incremental improvements. Even though the results in these papers might take a great effort and brilliance to arrive at, their significance from the traditional ‘research paper’ point of view might be negligible. The value of such publications is not diminished, but it is evaluated by more or less constant pool of people (editorial boards) with limited time at their hands. Naturally, the decision about such papers is thus mostly negative, which seemingly increases the bias of the editors and reviewers. No editor or reviewer would be consciously trying to hurt someone, but the disproportionate growth of submissions has the effect of small increments - the pressure on productivity is growing slowly enough so that it is hard to notice it looks like a bias from the outside.

It is rather the institution of a ‘research paper’ and the lack of time that cause these issues combined with the requirement on the scholars to publish in high impact factor (IF) journals, that is increasingly harmful. The advent of open access journals is proving that also the significance of IF is diminishing. Take an example of IEEE Access, largely dedicated to those underserved technical and application papers, which has an IF of 3.557 (at the time of writing this post), and compare it to IEEE Transactions on antennas and propagation with IF of 4.13. The paradox here is that the former achieved such IF within six years, and the latter over sixty seven years.

Figure 2. Why do authors publish in journals they choose to - the most important of reasons is the review process, the reputation of a journal, and content quality. Review time, the right audience, and impact factor have secondary importance, while user experience, open access, or review transparency are of negligible importance.

The relative unimportance of IF (see Figure 2) to the authors is in a stark contrast to the official requirements majority of universities and research institutions have on the publication venues. The authors mostly care about letting the community know about their results. Given the fact that readers are increasingly searching for papers using search engines based on the keywords rather than through journals, the weak concern with the IF is not a surprise, but remains propelled by the outdated system of funding acquisition taking the IF into account. Nevertheless, initiatives such as Plan S are aimed at diminishing the momentum of the IF influence, recognizing the dangers of excessive reliance on the controversial metric.

EE researchers give the biggest importance to the quality of the review process, the reputation of the journal, and quality of the content, when deciding about where to publish - see Figure 2. These criteria also seem to be increasingly a sign of the legacy journal system, because the internet has fundamentally changed the way we access information and academia is catching up slowly. Finding weak papers in high profile journals and vice versa is a fact of life in the world of liberalized access to information.

On the contrary, authors care little whether the journal is open access, or user friendly (see Figure 2). The open access does not bother the authors because it is their institution that pays for both, publication and access fees. Mostly cumbersome and outdated web interfaces of the journals also do not seem to concern authors, which makes sense given that the submission and review of papers are technically very simple tasks to do.

As far as reviewing papers, most authors look at it as their duty and a way of gaining academic merit, although growing number of scholars would not mind being paid for the service. Many consider reviewing papers as a means to stay up to date on the topics of their interest and take it as a part of the service to the broader community, see Figure 3. 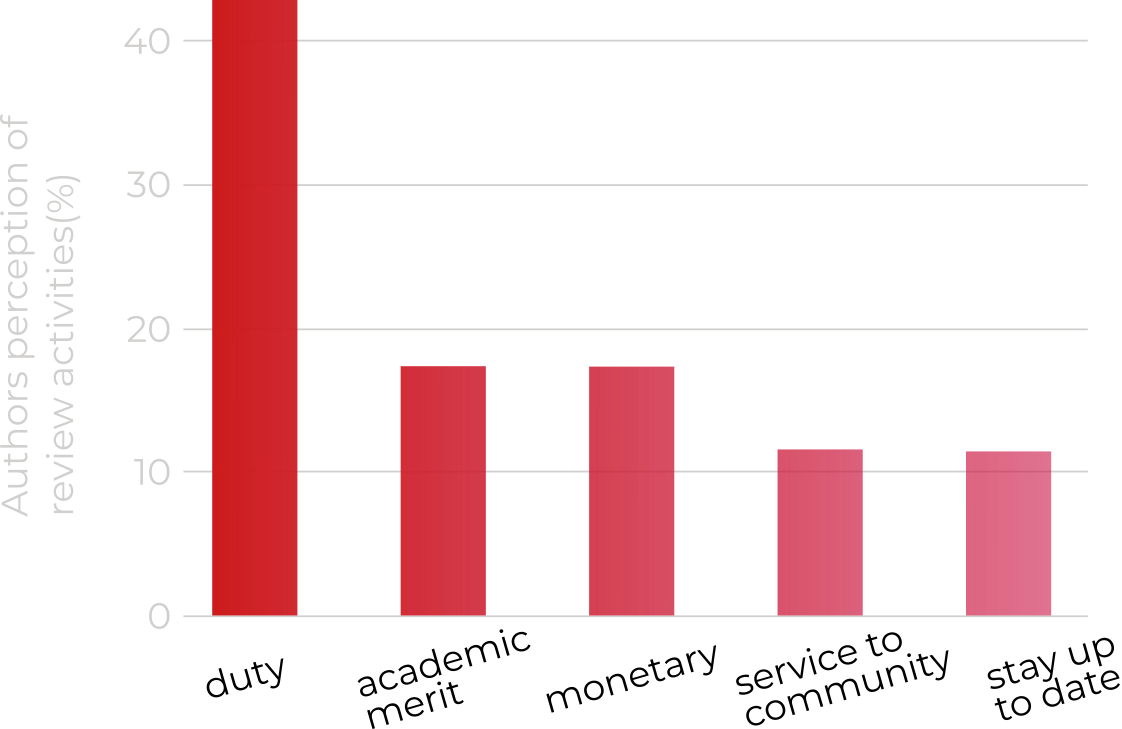 Figure 3. How authors perceive reviewing activities? Mostly as a duty and a way to gain academic merit. Some would welcome a monetary reward, but quite a few take it as a service to the community, or a way to keep up to date with what is happening in the field.

Looking ahead, one can not but think that the metrics to rank our publications will have to become more personal. IF of journals will slowly fade, while ‘per paper’ IF will grow in importance, because it still matters when a paper is cited thousands of times. The evaluation of research should increasingly take into account the applicability of the results to give credit and encouragement to those hard-working research engineers and scientists for solving difficult tasks helping to make many peoples’ lives easier, because, in the end, that is what it is all about. Knowledge for its own sake might be interesting, but it only becomes useful once it benefits someone, at best, as many as possible.